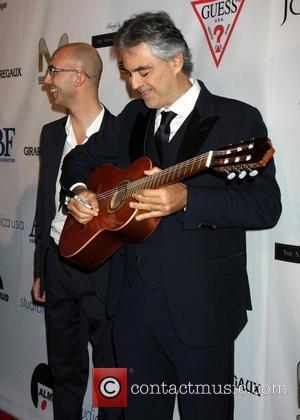 Blind tenor Andrea Bocelli is to be honoured at the upcoming Classic Brit Awards with the event's International Artist of the Year prize.
The Italian opera star has also been nominated for Male Artist of the Year and his Concerto - One Night In Central Park is up for Album of the Year.
Pianist Benjamin Grosvenor, composers Paul Mealor and Ennio Morricone, tenor Noah Stewart and guitarist Milos Karadaglic have landed multiple nominations for the prestigious British music awards too.
Hollywood composer John Williams will be honoured at the prizegiving event with a Lifetime Achievement Award, while he will also compete for Composer of the Year with Morricone and Mealor.
The event will be held at London's Royal Albert Hall next month (Oct12).