Andre Benjamin is Effortlessly Cool as Jimi Hendrix in 'Jimi: All Is By My Side' [Trailer + Pictures]

Scroll for the trailer and some pictures from the movie

Andre Benjamin, better known by his Outkast pseudonym, Andre 3000, bleeds cool in the new trailer for ‘Jimi: All Is By My Side’ in which he plays the legendary musician before worldwide fame caught up with his awesome talent.

The film sees Hendrix navigate London in 1966, a year fuelled by drugs, guitar music and national pride derived from England’s solitary World Cup win. We watch as he battles the cynicism of the music industry while simultaneously taking it by storm, and how his relationship with Kathy Etchingham (Imogen Poots) begins to fall apart as his star becomes known.

The decision to focus on a pre-famous Jimi has confused some, but for writer/director John Ridley, it was the only way to make his character – and he was as much of a character to people in this film as he was in real life – seem connectable with audiences.

“Jimi is a legend and an icon; there will always be those touchstones,” he explained to Rolling Stone back in March. “But beyond that, if an audience cannot connect with him as a person and a character in terms of humanity, then we might as well go to a museum and just walk part his guitar and his suit, because that’s kind of what you’re doing. It's just a pass-by.”

Watch the trailer for ‘Jimi: All Is By My Side’ right here


Ridley also opened up on having Benjamin play his lead role in the same interview.  “I was blessed, because I got a musician who can act and an actor who could play. André is just a unique talent, and part of that talent that you see also came from a lot of hard work,” he explained. “The first time I met him, he had a curiosity about the world that was equal to what I believe Jimi’s curiosity about music and the world was at that time in his life. He’s got the physicality, he’s got the emotional curiosity, he’s got the charisma — so to a degree, he’s already there.”

Also starring Hayley Atwell, Burn Gorman, Ruth Negga, Ashley Charles and Clare-Hope Ashitey, Jimi: All Is By My Side’ is set to be released on August 8th 2014. 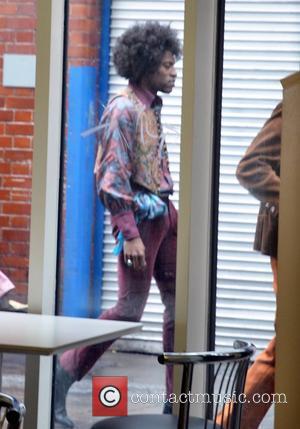 Andre Benjamin is Effortlessly Cool as Jimi Hendrix in 'Jimi: All Is By My Side' [Trailer + Pictures]