And So I Watch You From Afar - Gangs Album Review

The four-piece Belfast based instrumentalists are back with their second release, fresh from an unprecedented number of tour dates around the globe, the 'gang' of four return to the studio looking to emulate their much appreciated self-titled debut. 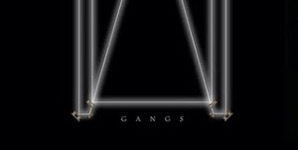 Straight away, with the album opener 'BEAUTIFULUNIVERSEMASTERCHAMPION', the listener is welcomed by an almighty storm of noise and accompanying 'whoops' before the first set of guitar hooks bring the song to its early peak of noise. This is soon broken down to an atmospheric build-up mid song until a new series of hooks and cymbal crashes create the impressively earsplitting finale of the song. The ride doesn't just end there as the second song of the album, the imaginatively named Gang (Starting Never Stopping), does what it says on the tin, it never stops with its constant break-neck speed riffs and agitated fits of notes. That is until about four minutes into the song when a static rumble calms down the pace of things, until the next song of course.

Like with their previous releases, and with the works of similar artists, 65daysofstatic and Pelican, the work rate of the band is uncompromising and the talent of the group is obvious, being able to catch the attention of the listener based solely on your musicianship, with no help from a vocalist, is no easy task. This is what makes these bands great; they are able to craft great looping musical landscapes that are almost akin to the works of great classical composers. If Rachmaninoff had access to electric guitars you can't help but wonder if he, or someone similar, would have created something akin to the post-rock sound.

Album closer 'Lifeproof' concludes with the carnival-esque whistles of a Friendly Fires song, 'Kiss of Life' in to be exact. They seemed to symbolize a celebration of the album; you have just dedicated the last forty-five minutes of your life to the immense sounds of ASIWYFA and the listener should celebrate the time they've given to the band, it wasn't forty-five minutes lost.

There's no hiding from the thrashing of the heavily distorted guitars, the pounding of the drums and the convoying bass lines, mostly because there's no one person for them to hide behind. But why would you want the band to shy away from this? It's exactly what the band do, and they do it pretty damn well. I'll admit ASIWYFA may belong to a genre that isn't for everyone, but for those who do enjoy this form of prodigious performance there's a lot of outstanding music here.

And So I Watch You From Afar - Gangs