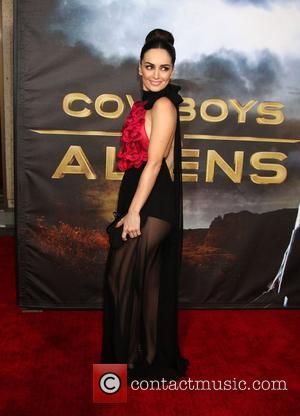 Mexican star Ana de la Reguera struggled to film scenes opposite Daniel Craig on the set of action film Cowboys & Aliens because she had a huge crush on the Brit.
The sexy Nacho Libre star, who plays Sam Rockwell's wife in the sci-fi western, admits she was smitten with Craig the minute she met him - and she spent much of the movie trying to avoid eye contact.
She tells Angeleno magazine, "He was my one and only crush. I couldn't even look at him on the set. The first time I saw him, I said, 'Oh my god, I'm in love with you!'"
But the actress just missed out on spending quality time with the James Bond star - he had already fallen for Rachel Weisz, his co-star in upcoming thriller Dream House. The two Brits wed in June (11).