Winehouse Reunites With Ex-husband On Camera 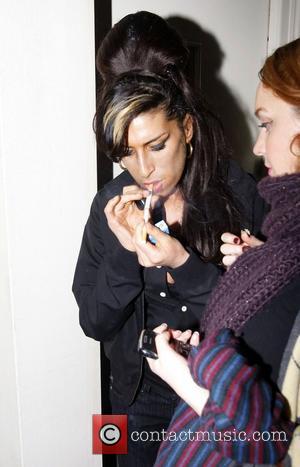 Picture: Amy Winehouse lights up a cigarette as she leaves a bar in Great Compton Street, Soho with friends in the early hours of this morning....

Amy Winehouse has been pictured in the arms of her ex-husband Blake Fielder-Civil for the first time since their divorce - confirming they are a couple again.
The pair divorced last July (09) following a turbulent two-year marriage, which saw them sink into drug abuse and Fielder-Civil jailed on charges relating to a 2007 attack on a pub landlord. The union was dissolved after the singer admitted adultery in court papers.
Rumours of a reunion surfaced when they were spotted enjoying an intimate night out in September (09).
Winehouse has since been seen wearing her engagement ring and was snapped visiting her ex-husband's apartment in Sheffield, England in December (09), where he is undergoing treatment for drug addiction.
Now a new photograph has surfaced showing the newly-reunited couple locked in a passionate embrace - apparently confirming they are back together.
It is unclear exactly when the picture was taken, but editors at British magazine Heat claim the photo was snapped during a recent secret meeting at Fielder-Civil's apartment in the city.
Fielder-Civil recently claimed the couple is planning to remarry, telling British newspaper The Sun, "We're back together, and we're engaged. Amy and I have talked about getting married again and starting a family."