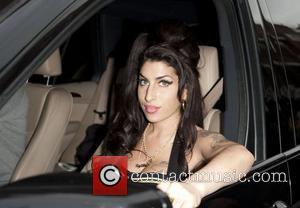 Picture: Amy Winehouse leaving a Central London hotel ahead of the premiere of 'Going The Distance' London, England - 19.08.10

Amy Winehouse has split from her boyfriend REG TRAVISS, according to U.K. reports.
The Back to Black hitmaker has been dating the director since earlier this year (10), but the relationship was rocked last month (Aug10) when photographs emerged of Traviss walking hand-in-hand with his former partner, burlesque dancer Raven Isis Holt.
Holt later alleged Traviss had revived their love affair while he was still involved with the star.
And the rumours seem to have pushed the couple to break up, reports Britain’s The Sun.
A source tells the publication, "She (Winehouse) hasn't spoken to Reg since and she's told everyone that it's over. She's pretty cut up (upset) about it, she was serious about him. Amy is confused and vulnerable."