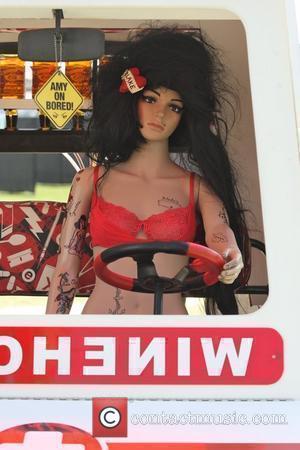 Picture: Amy Winehouse, who was supposed to play at the 2010 Coachella Valley Music and Arts Festival, didn't make it into the US, but her renewable...

Amy Winehouse was admitted to hospital on Sunday (25Apr10) following a drunken fall which left her with injuries to her face and ribs, according to a U.K. report.
The Back To Black hitmaker was taken to a private clinic in London after taking a tumble at her home, which left her with bruised ribs and a cut to her forehead.
A source tells British newspaper The Sun, "She'd had a few (drinks). At first she thought she had broken something, so got her security to take her to hospital. The doctors were worried she might be concussed because she had a big bump on her head and a cut above her eye."
Her injuries were described as "not serious" but her agent added: "She really likes the clinic so may stay a few days."
However, Winehouse's stay has reportedly been causing mayhem at the clinic.
An insider reveals, "Amy was running up and down the corridors with her top off and reeking of booze. She has been heard complaining of pain caused by bruising on her breasts and around her ribs.
"The nurses had to step in and ask her to calm down. Eventually she had to be taken back to her room. The ward sister was absolutely fuming."
It is Winehouse's second hospital stay in recent weeks - she was kept in overnight at the beginning of the month (Apr10) while doctors carried out a series of tests after she complained of chest pains. It came after she recently underwent breast enlargement surgery.