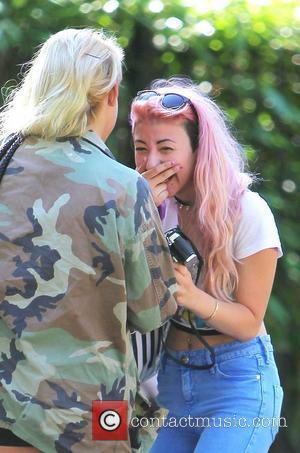 Picture: An Amy Winehouse fan cries as she remembers her idol, one year on after the tragic singers death London, England - 23.07.12

Tragic Amy Winehouse's collaborators Tony Bennett and Nas are to be honoured at a new Inspiration Awards gala named after the late British star.
Nas, who worked with the Rehab singer shortly before her 2011 death, will also perform at the first Amy Winehouse Inspiration Awards & Gala in New York on October (12), which will benefit the charity foundation set up in her memory.
The rapper says, "Amy was an amazing talent and a special artist. She was like a little sister to me. I'm happy to be involved with a foundation that not only keeps her memory alive but helps support those things she cared most about - kids and music."
Bennett and producer Salaam Remi will also be honoured for inspiring "greatness in others".
Bennett recorded jazz standard Body & Soul with Winehouse for his hit 2011 Duets II album and donated a portion of proceeds to the Amy Winehouse Foundation.