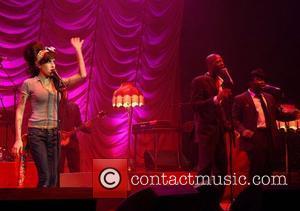 REHAB singer Amy Winehouse's mum has revealed her concerns about her daughter's weight.

The skinny 23-year-old, who recently married fiance Blake Fielder-Civil, has raised questions over her current lifestyle after appearing to lose weight over recent months.

Her mother, Janis Winehouse, told the Daily Mail: "Amy's always been slim but has never been this skinny before."

However, Amy seems keen to forget about weight issues and concentrate on her new husband, whom she married in Miami 11 days ago.

In a typically bizarre gig at the Shepherd's Bush Empire, Amy told the audience that she has married "the best man in the entire world" but added: "My dad's going to kick my head in - he's still got to pay for the proper wedding."

The singer's gig was attended by a host of celebrities, including SIR Elton John, FRIENDS star David Schwimmer and GIRLS Aloud singer NICOLA ROBERTS, although Amy started off by admitting she could "only just sing" as she had broken a tooth.

And to compound her lovesick-fuelled gig, she spent part of the first half blowing kisses and mouthing "I love you" to her husband in the balcony.