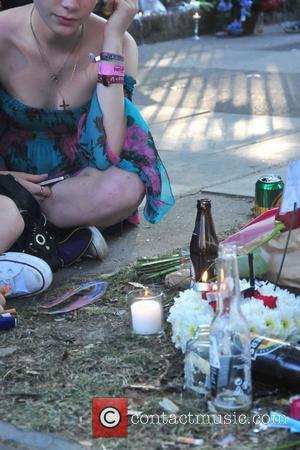 Picture: Fans gather outside Amy Winehouse's apartment to celebrate her one week since she died London, England - 30.07.11

Amy Winehouse's duet with jazz legend Tony Bennett is set to be released as a charity single on 20th September 2011. The rendition of 'Body and Soul', made famous by Ella Fitzgerald and Frank Sinatra, was recorded at London's Abbey Road Studios in March, just months before Winehouse's tragic death, reports MTV News.
The track, thought to be one of Amy's last recordings, will be released ahead of Bennett's 'Duets II' album on 20th September. Speaking about the record's proceeds, Bennett explained, "What's going to happen is that we're putting that [Body and Soul] out ahead of the album.And it's going to a foundation that her father started - to teach all the young children not to take drugs, and all the royalties of the record will go to that". A long-time admirer of Winehouse, veteran Bennett called her "truly, a good jazz singer" during an appearance on Bbc Radio 4's 'Front Row' last month. Amy had often covered the legendary New Yorker's songs during her live shows.
The singer died unexpectedly on 23rd July at her north London home following years of addiction. Although a post-mortem has taken place, the singer's family are still awaiting toxicology results to determine the exact cause of death.