The untimely tragic death of Amy Winehouse in July at the age of just twenty-seven remains one of 2011's biggest news stories, and no doubt will continue to be a major talking point long after Auld Lang Syne brings this year to a close. A uniquely gifted talent amidst an industry of pre-processed bland mediocrity, her 2006 sophomore record 'Back To Black' having deservedly attained classic status long before this summer's poignant events. 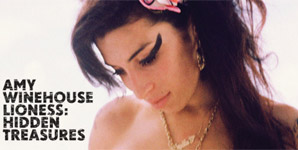 Of course by the time you read this, 'Lioness: Hidden Treasures' will probably have reached the number one spot in the Album Charts, with only a brave man or a fool likely to bet against it staying in pole position throughout the Christmas rush. And herein lies the problem. While we wouldn't dream of accusing Amy Winehouse's former label and management team of orchestrating a tasteless cash-in solely aimed at the Christmas market; the thousands of tributes laid outside the Camden flat she called home confirming her iconic status; one feels if Winehouse were alive today she probably wouldn't have been overly enamoured at the release of such a hotchpotch collection of demos, alternative versions and unfinished tracks.

Since her high profile fall into the drink and drug induced decline which culminated in her passing, it would be fair to say that she'd struggled to maintain the previously high standards set in both her recordings and live performances. Reports claim she was on the road to recovery in the weeks leading up to her death, and two of the most recent recordings here, 'Like Smoke', the song written for the then-impending third album which features Nas performing a customary rap over the top, and 'Body And Soul', the duet recorded with Tony Bennett only weeks prior to her death, both hint at the old sparkle returning, albeit briefly in comparison to the fire and thunder of those 'Back To Black' recordings.

Elsewhere, 'Lioness: Hidden Treasures' veers between the sublime - reggae infused opener 'Our Day Will Come' and the Mark Ronson produced rendition of Carole King's 'Will You Still Love Me Tomorrow?' both falling seamlessly into this category - and the ridiculous. Neither 'Halftime' or 'Best Friends' were originally considered good enough for inclusion on Winehouse's debut 'Frank' when first recorded in 2003 so it beggars belief why they've been allowed to surface now. Indeed Ronson's involvement is minimal here, which considering the pivotal role he played during those 'Back To Black' sessions and (briefly) beyond is surprising.

That said, esteemed hip hop producer Salaam Remi makes a credible attempt at polishing the rough diamonds that punctuate the heart and soul of 'Lioness: Hidden Treasures'. However, don't anyone be fooled into thinking this would have been anything like the finished product had Amy Winehouse lived to make that long-awaited follow-up to 'Back To Black'. Instead, it represents a near-passable compilation, which only briefly illustrates what a precocious young talent she was, and in hindsight is maybe best left alone for all but the most avid of collectors.

Apparently, at least another dozen part-written, part-recorded Amy Winehouse compositions remain locked away in the vaults. Let's hope they stay there as a mark of respect to the memory of their creator rather than continually rising from the grave when the coffers run dry in similar fashion to Tupac or more recently, Michael Jackson.