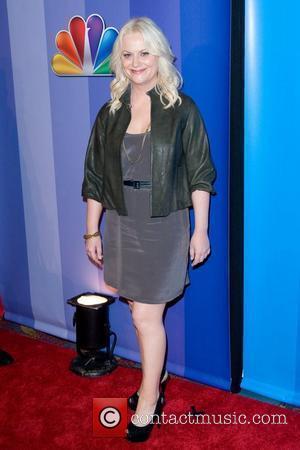 Amy Poehler, the American comedian and star of Saturday Night Live, has made a cameo appearance in the season two finale of web-series 'Broad City'. Amy Poehler delighted fans by making a hilarious appearance in Iiana Glazer and Abbi Jacobson's acclaimed internet comedy show.
The comedy duo, who also performs live under the 'Broad City' name, wrapped up season two by enlisting the help of Poehler and Kristen Schaal. In her short cameo, Poehler is seen running through the streets of New York with Glazer and Jacobson, before crashing into man carrying a tray of oranges. As she feigns injury on the floor, Poehler tells the duo to 'go on without her', shouting, "Save yourself. There's too many oranges. They're too heavy, there's too many of them, they keep coming", adding, "You guys are really in the zone, just go with the flow and live your dreams". Poehler, best known for playing 'Leslie Knope' on NBC's hit comedy 'Parks and Recreation', recently voiced characters for the animated movies 'Megamind', 'Hoodwinked 2' and 'Alvin and the Chipmunks: Chip-Wrecked".
Amy Poehler was a cast-member on Saturday Night Live between 2001 and 2008. During her time on the show she was famed for her impersonations of A-list stars, most notably Britney Spears, Madonna, Avril Lavigne, Sharon Stone and LINDSAY LOHAN.