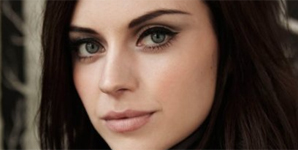 Scottish singer/songwriter, Amy Macdonald, shot to fame with her debut album 'This Is The Life' in 2007. Since then she has been performing live alongside artists such as Paul Weller and U2. A few weeks before the release of 'A Curious Thing', Amy tells us a bit about the new album and her achievements so far.

Your debut album was released in 2007. Can you tell me a bit about what you have been up to since then?
It's just been constant for me. The album came out in 2007 and gradually became successful all over Europe. So I've just been touring Europe and doing lots of promos. I only did my last gig from that album at the end of September. We had to cut it off really because it was going on forever.

I've not really had a break to be honest, although I suppose for the UK it must seem like I have disappeared off the face of the planet.

What has been the highlight so far?
There have been so many, I have just done so many incredible things all over the world, played to so many amazing audiences, and played with so many incredible artists. I mean, I was told by U2 that they were my fans.

You are still just 22, does this all seem real to you?
It doesn't, and it still doesn't. This whole job and my lifestyle are constantly surprising me and I would never take it for granted. I feel so lucky to be in this position because so many people would kill for this. I feel very honoured that people seem to like what I do.

You seem very down to earth; do you still manage to live a typically normal life?
Definitely. 100%. I have always said that it is completely about the music, and I have never been interested in anything else. I think I've been able to maintain that. I'm a totally normal person, I don't get followed or have photographers waiting outside my door. So yes I have a very ordinary life.

Was there anyone who inspired you to get into music?
It was actually Travis with their album 'The Man Who' that made me want to play guitar, but they haven't really brought anything out since then. But that album inspired me to play.

Your second album, 'A Curious Thing' is released in March. Tell me a bit about that.
I'm really excited by it. For me, I'm really proud of the songs I have written. It's sort of a natural progression from the first album. When I wrote the first album I had never played live before, and I'd never been on tour. So that was really just me and my guitar. Now with this album I have literally played hundreds and hundreds of shows with my band, which means that when they are behind you, you are naturally a bit more edgy and a bit rocky, and that shows through a lot more with this album.

Do you prefer playing solo, or with a band?
I prefer playing with a band. It's good to do both, but for me it's quite exciting when I hear my songs completely transformed with the band behind me. You can really get into it more, and so can the audience.

Your debut album, 'This Is The Life', went to number one in the album charts. How did you react to such a success?
I remember I was in my car and we got told on the Friday that the album was already number three. It was thousands of copies behind Take That and Radiohead. But for me I was just happy to be in the company of those bands, and have the album behind two of the most successful bands. Then on the Sunday I got a call to say that it had overtaken them both and was at number one. I was just gobsmacked, I didn't expect that at all. I had to pull over and have a little scream to myself.

Does this put extra pressure on your new album?
This is a new project, and I'm sure it would put pressure on me, but I try to purposefully not think about it. It's hard enough to come up with new songs and record them, but if I was thinking about all of the other things it would turn me into a nervous wreck.

Do you write tracks from personal experience?
Yes and no. It's hard for me to always explain my songs, and people always expect a meaning and to know what it's about. Sometimes when I write these songs I'm feeling a particular emotion, so to then come back and explain what I was feeling or put it into words is quite difficult. Sometimes I don't even know what they're about so I feel I have to make something up to make people understand a bit more.

Paul Weller appears on your new album, how did that happen?
I supported Paul Weller back in 2007, and I think that was probably the first tour that I did. He was just really nice. He stayed in touch, and even came to a few of my shows. He said to my manager that if we ever needed a studio to record in we could use his. So this album was actually recorded this album in his personal studio. It was just incredible. It had all of his memorabilia and awards there. It was just so much more inspiring being somewhere like that which had all of these things on the wall.

He came down for a couple of days and we managed to get him to do a bit of bass and guitar. It's not a massive collaboration, but he's on there, which is really cool for me.

Do you have a favourite track on the album?
I'm just so proud of all of them, and happy that they are all on there. My favourite one to perform live is the song 'No Roots'. It's just really special to me.

I've heard that you are proud to say that you have not been auto tuned on your new album. Is this true?
No, that's right, and I think it makes it more personal. When it's not quite perfect, I think that makes them more perfect if that makes any sense. One of my favourite bands is The Killers, and there are some things they sing which are off key a little bit, and to me that makes it perfect.

Nobody is perfect and I think that if you spend hours making everything in tune, people will be slightly disappointed when you sing live if you are slightly off key all of the time.

Especially when there is a lot of speculation over artists miming at the moment.
Yeah I think a lot of people do hide behind auto tune and I don't think that's right when you have to perform live. You'll start to think, well who is the person singing on the record then because it's not the same person that's singing live.

I think I sound exactly as I do on the album when I sing live, so everyone knows what to expect.

Your first single, 'Don't Tell Me That It's Over' precedes the album release. Can you tell me a bit about the track?
Yes. As with all of the songs I have tried to come up with a meaning for it, but the way I look at it now is that it's a song about dong something because you want to, and not because you think you have to. The example I use is the global warming issue. I think it's really important issue, but I also think that people should do something about it because they want to and they feel passionate, not because the government say you must stop driving or you must stop flying. I don't think that works.

What have you got coming up in 2010?
I will be touring in the UK early this year, but I've done so much across Europe that I will probably go back there. That won't be until the summer though.

At the moment I'm happy to be back in the UK, it's nice to work at a normal pace and not worry that people can't understand me. I'm looking forward to playing live in the UK, and to UK audiences because I have missed them. I just want to do my best, play as much as possible, and hope that people like what I do.

I've got lots in my diary but we're just waiting for things to be confirmed, like festivals. It's all been spoken about and lots of things are in the air.

You've made some significant achievements in Germany.
Yes, I think I've sold more than Amy Winehouse over there.

Best International female.
Yeah it's unbelievable, it seems to just work there. I have no explanation for it, I'm just very grateful.

Who are you listening to at the moment?
I listen to such a mixture of things. I was flying back from Switzerland last night and was listening to Sinatra, so that's a bit random. Then for albums at the moment I like the Kasabian album, I mean I'll listen to anyone really.

What's the best advice you have been given so far?
I think it would be from my mum, Just to try your best, and if people think that you're not good enough then that's their problem. As long as you've done your best then they can't really expect anything else from you.

Amy MacDonald: Video games are a saviour in lockdown