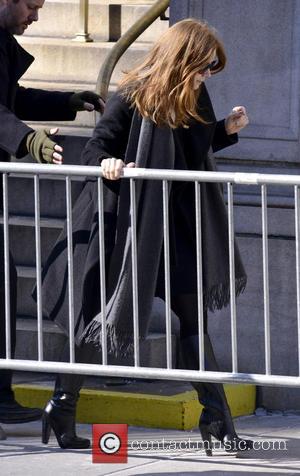 Picture: Amy Adams - The funeral of actor Philip Seymour Hoffman held at Church of St. Ignatius Loyola in Manhattan. Hoffman was found dead in his...

A representative for actress Amy Adams has slammed bosses of designer brand Valentino for using a photograph of the star at Philip Seymour Hoffman's wake, branding the stunt "truly appalling".

The fashion company came under fire after releasing a picture of Adams carrying a red Valentino handbag at a memorial for the tragic actor, with the caption, "We are pleased to announce Amy Adams carrying the Valentino Garavani Rockstud Duble bag from the Spring/Summer 2014 collection on Feb. 6 in New York."

A representative for the American Hustle star has now issued a response to the storm, telling E! Online the actress "is not a paid spokesperson for Valentino, and the suggestion she would use this moment to participate in a promotion is truly appalling".

Valentino bosses issued an apology for the mistake soon after releasing the photo and expressed regret over the incident.