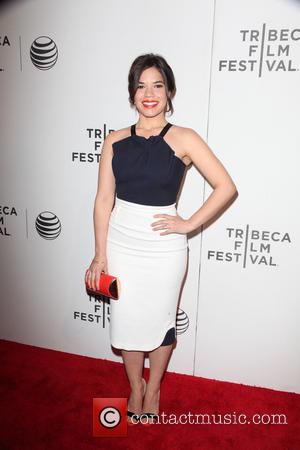 America Ferrera and her husband Ryan Piers Williams put their marriage to the test in new drama X/Y - the writer/director filmed his wife making love to rapper Common.

In only his second feature, writer/director Williams cast the Ugly Betty star as Sylvia and himself as her ex, Mark - and then found himself behind the camera for voyeuristic sex scenes.

The couple knew the film would shock family members, so Ferrera and Williams sat them down before X/Y premiered at the Tribeca Film Festival in New York last weekend (19-20Apr14), and attempted to explain why sex scenes between them and others were important for the project.

"She watched it and called me crying after and loved the film. It was really touching to hear my mum respond in such a positive way."

Ferrera had a similar experience: "My sister was at the premiere and she really loved the film and came away with the emotional impact and journey more than, 'I can't believe I had to watch my sister and her husband make love!' All of the sex in the film is in service of something so much deeper.

"It's not as graphic as the experience of watching it might feel. It does feel incredibly intimate, like you're watching something between us that you probably shouldn't be watching. Sexuality is complicated and sometimes it's as simple as a hand touching the curve on your back and it's the most sexual, intimate thing you can experience. Of course, as an actor, I appreciated Ryan didn't get gratuitous with the sex!"

But Williams was really tested as a filmmaker when he had to shoot his wife making love to another man: "It's an intense experience to direct your wife in a sex scene or be in a sex scene yourself. You have to really make yourself vulnerable and that can be uncomfortable. Common was very respectful and my job was to make him feel comfortable and provide a space for him to do his best work in the scene."

The actress, who also reteams with her Sisterhood of the Traveling Pants co-star Amber Tamblyn in the film, admits the sex scenes weren't the most difficult thing about the movie - she also had to pretend her relationship with her husband had ended.

She tells Entertainment Weekly, "Some of the intense fighting scenes our characters had to go through were difficult. I also found that some of the moments where Sylvia is alone were tremendously sad. You have to put yourself in such a vulnerable position to convey those sorts of things and really feel them, which made sitting in these characters day after day really kind of hard."