It started off as Kanye vs Wiz Khalifa on twitter last night…until Amber Rose stepped in.

If you were lucky enough to be sitting in front of twitter at the right time last night then you probably caught Kanye West’s epic rant against rapper Wiz Khalifa, most of which has now been deleted. But Khalifa wasn't West’s only target during his tirade, Yezzus also took aim at his former girlfriend Amber Rose, who happens to be Khalifa’s ex-wife. But then it all ended suddenly when Rose showed up to shut down her former boyfriend, once again. 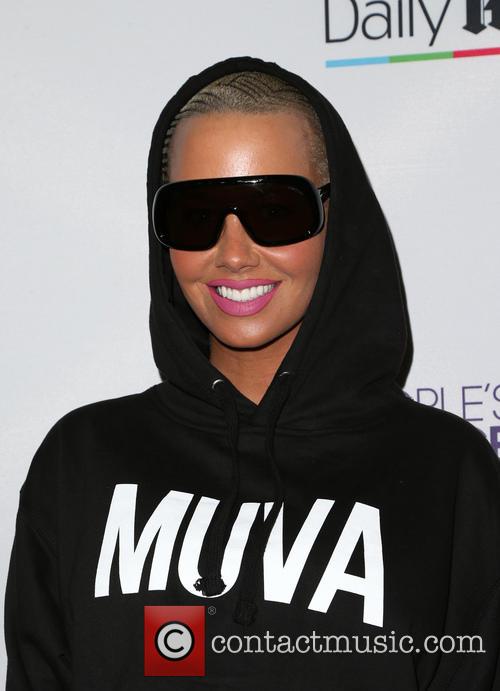 Amber Rose got involved in the twitter war of the century last night.

To recap the drama, when Kanye revealed that his new album was now titled Waves, Khalifa pointed out on twitter that rapper Max B. had originally created ‘the 'wavy movement’. Then in a separate tweet, Khalifa wrote, ‘Hit this kk and become yourself,’ in reference to his own strain of marijuana.

Thinking that ‘kk’ was instead a reference to his wife Kim Kardashian, West went on a 140-characters-or-less rampage against Khalifa, dissing his music, his style and also his former wife and mother of his son, Amber Rose.

“You let a stripper trap you,” West tweeted. “I know you mad every time you look at your child that this girl got you for 18 years.” Before marrying Khalifa, West and Rose dated for two years, splitting in 2010 and the pair are anything but amicable exes.

Responding to West’s comments, Rose then got involved tweeting, ‘Aww @Kanyewest are u mad I’m not around to play in ur a*****e anymore? #FingersInTheBootyA******h,’ which may or may not have led to West deleting his previous tweets.

‘Lol @kanyewest Now u wanna delete ur tweets cuz Muva has arrived?’ Rose later added. While West’s rant against Khalifa was bad enough, his involving of Rose in the drama only made the situation worse for the rapper, as he was once again slammed for ‘slut-shaming’ Rose.

This isn't the first time West has attempted to ‘slut-shame’ his former girlfriend. Last year, during an interview on ‘The Breakfast Club’ West said: "She's just soakin' in the moment. If Kim had dated me when I first wanted to be with her, there wouldn't be an Amber Rose."

"It's very hard for a woman to want to be with someone that's with Amber Rose...I had to take 30 showers before I got with Kim." West’s comments against his former girlfriend led Rose to become a spokesperson against ‘slut-shaming’ and in October she launched the ‘Amber Rose Slut Walk’, during which she addressed her former boyfriend.

More: Amber Rose Takes A Walk Of No Shame In New 'Funny Or Die' Video

Speaking about West’s comments Rose said: “I was extremely slut shamed. I was called nothing but a stripper. Why would he ever be interested in me, I’m just a bald-head stripper from Philly. I was a gold digger.”

“Apparently you gotta take 30 showers after being with me. “That’s what he [Kanye] said. So, I get that just washed all my sexy bald-headedness off of his ass.” At the time Rose added that she’d decided to be the bigger person and forgive West, though after last-night’s drama these two are unlikely to be exchanging pleasantries anytime soon.

Although he’s admitted he misunderstood Khalifa’s 'kk' comments and he’s deleted all his tweets towards the rapper, West hasn't yet responded to Rose or offered an apology for dragging her into the drama. But perhaps next time Kanye will think twice before he mentions his ex or her former profession again, because it looks like Rose is no longer holding back.