Heard and Depp took the stage together, when she accepted her award.

To all the naysayers – Johnny Depp and Amber Heard are still together and they really want you to know about it. The couple attended the Art of Elysium Gala this past Saturday and they laid on the PDA pretty thick, you guys. By which I mean, there are numerous photos of the couple kissing on the red carpet. 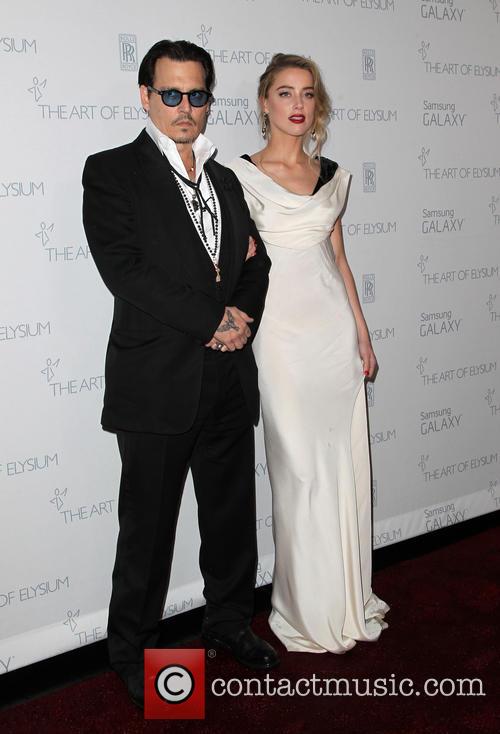 Heard and Depp were definitely on the same team at the Art of Elysium Gala.

And I don’t mean kissing as in a little peck, the two of them seem to be full on making out. Which is to be expected at such an otherworldly, liberating event, I guess. Sorry, I meant “experience”.

“This is an experience,” organization founder Jennifer Howell said, as the group of A-listers lounged on pairs of beds wearing dappled gray robes supplied by Costume National inside Hangar 8 at the Santa Monica Airport.

Celebrities were there to appreciate Abramovic’s vision, separated into four installations, starting with a film, as two people sat unmoving at a table, before performing as a couple in love and a couple separating. Next came a 3D art video depicting human evolution and conflict, looking like the apocalypse, according to the LA Times.

But back to Heard, who was honoured with the Art of Elysium Award, , a trophy so heavy that Howell called upon Heard’s fiancé Johnny Depp to retrieve the commemorative treasure. The award was bestowed upon Heard for her work on behalf of the charity - which brings the arts into the lives of seriously ill children. Heard talked of her joy in “dancing around the hospital, cross-eyed, in clown shoes and bunny ears,” which she considers a life-changing experience.