Over 50 topless pictures of Amber Heard, including one containing a private message to fiance Johnny Depp, have been leaked online. 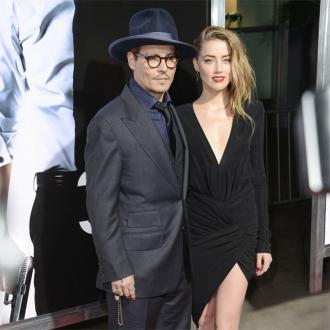 Over 50 racy photographs of the 28-year-old beauty were posted onto websites 4chan and Reddit yesterday (21.09.14) afternoon, including a message to her 51-year-old fiance.

According to TMZ, in the picture, Amber is holding up a sign which is clearly directed at the 'Lone Ranger' star and in which she refers to him as 'Tonto'.

Meanwhile, 'Being Mary Jane' star Gabrielle Union has hit out after a topless photo she sent husband Dwyane Wade was leaked online, comparing the publication of private pictures to ''hate crimes''.

She and her spouse - who have called the FBI over the matter - said in a statement:''It has come to our attention that our private moments, that were shared and deleted solely between my husband and myself, have been leaked by some vultures.

''I can't help but to be reminded that since the dawn of time women and children, specifically women of color, have been victimised, and the power over their own bodies taken from them. These atrocities against women and children continue worldwide.

''For anyone out there also being affected by these and other hacking and hate crimes - we send our love, support and prayers. We have done nothing wrong.''

The photos of Amber and Gabrielle were leaked this weekend along with racy images of a host of stars including Kim Kardashian West, Rihanna, Kate Bosworth, Hayden Panetierre, Lake Bell, Avril Lavigne and Vanessa Hudgens.

The huge privacy breach came three weeks after another group of stars, including Jennifer Lawrence and Kate Upton, had photographs leaked online.

More than 100 celebrities were affected by the scandal last month after an identified hacker stole explicit images and videos from Apple's iCloud service.

Apple said it was ''outraged'' by the attack and encouraged users to update their accounts with a ''strong'' password and enable two-step verification.