Amber Heard and Johnny Depp have yet to discuss having children and their friends are worried that the couple's 23-year age cap could cause problems for them. 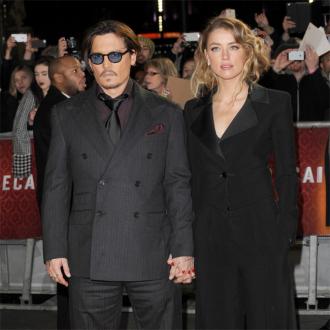 Amber Heard and Johnny Depp haven't discussed having children yet.

The couple got married in the Bahamas last weekend, but friends close to the 28-year-old actress fear their 23-year age gap could cause problems for them in the near future.

A source close to the blonde beauty said: ''Amber loves the idea of being with 'Johnny Depp,' but that infatuation won't last forever. And they've yet to have an honest conversation about kids.''

Friends close to Johnny, 51 - who has son Jack, 12, and daughter Lily-Rose, 15, with ex-girlfriend Vanessa Paradis, whom he split from in 2012 after 14 years together - also have their doubts about his marriage.

One insider said: ''His close friends don't understand why they didn't just keep dating. And no one knows they have a prenup, but Johnny is in love, so they're happy for him.''

Meanwhile, the duo, who got engaged in late 2013, only gave their 24 wedding guests seven days notice ahead of their intimate nuptials.

A source told US OK! magazine: ''Neither of them wanted anyone to know ahead of time, so it was quite a shock to friends, who only got a week's notice.''