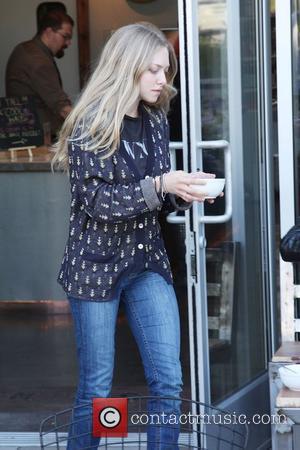 Picture: Amanda Seyfried carries a bowl of water to her dog whilst having a meeting with interior designers at a restaurant in West Hollywood West Hollywood,...

Amanda Seyfried stunned singer Justin Timberlake when he interviewed her over the phone for a recent magazine article.
AMANDA SEYFRIED, the American actress and star of 'Mamma Mia!', revealed that she was nude during an interview with JUSTIN TIMBERLAKE, reports the Toronto Sun.Seyfriend and Timberlake became friends whilst they were shooting the forthcoming sci-fi movie 'Now' and editors of 'Interview Magazine' decided that the singer would be the ideal candidate to chat with Seyfried about her new movie 'Red Riding Hood'. However, half way through the conversation, the 25-year-old actress surprised the singer by confessing that she had conducted the interview completely naked, saying, "I think I should mention that I'm not wearing any clothes". Timberlake, clearly taken aback by the remark, replied, "Well, if that's how you'd like to be interviewed then that's totally fine". Seyfried added, "I'm most comfortable in my birthday suit". The actress, who split from boyfriend Dominic Cooper in May 2010, says she is worried about visiting London again for a forthcoming promotional tour, telling Bang Showbiz, "I haven't been back to London since before we split. It's tough. I need to get back. But it's hard when your relationship starts there and then goes on for three years".
'Red Riding Hood' is set to hit cinemas on 11th March 2011. Set in a medieval village, the movie follows the story of a young girl who falls for an orphaned woodcutter much to her family's displeasure. Seyfried stars alongside Lukas Haas and GARY OLDMAN.