Amanda Seyfried and Justin Long took her pet pooch Finn along for a romantic date in a Los Angeles park. 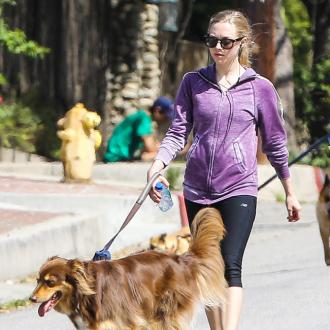 The 'Lovelace' actress treated her new actor boyfriend to a trip with her canine companion in Los Angeles, where the pair relaxed on a blanket in a nearby park as they let Amanda's dog find some more four-legged friends.

A source told Us Weekly magazine: ''Justin is super private about his relationships, [so] I'm not positive how they exactly met, but they've known each other for awhile, when they were seeing other people.

''They recently started hanging out more, going on date-like activities. They're both busy ... but they're seeing where it goes.''

Justin, 35, and Amanda - who previously dated her 'Mamma Mia' co-star Dominic Cooper for three years - were said to be ''inseparable'' at the actress' 'Lovelace' premiere in New York City last month.

An onlooker said: ''Justin came alone and stayed close to Amanda all night.

''They weren't making out or anything like that, but they were just inseparable during the event. He hung out when she talked with others.''