Amanda Bynes Out And About After Dui Arrest 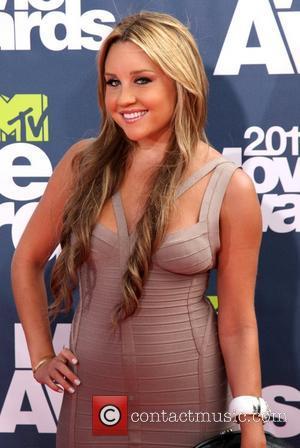 Hours after being placed under arrest for a DUI offence, actress Amanda Bynes was spotted leaving a West Hollywood jail with her face covered after being released on bail. Bynes, aged 26, was spotted applying make-up as she rushed to a waiting taxicab that took her to a nearby tow lot where her car was being impounded.
The Hairspray actress was again spotted later on in the Friday whilst sat on a bench wearing dark sunglasses, a black skirt and jacket with a white top and a pair of heels, People reports. The nondescript photo shows Bynes looking downtrodden and even more down in the dump than she did in her mug shot, obviously the after affects of alcohol were beginning to sink in when the post-arrest photo was taken.
The actress was arrested at around 3am on Friday morning following a night of partying at L.A.'s Greystone Manor Club after colliding with a police car, an incident in which no one was hurt. Bynes was still in custody by late Friday morning, with a reported bail of $5000 hanging over her. Bynes, nor any publicist attached to her, has yet to make any comment about the incident.