Amanda Bynes is enlisting into Fashion College following her release from rehab in order to give her a structured routine. 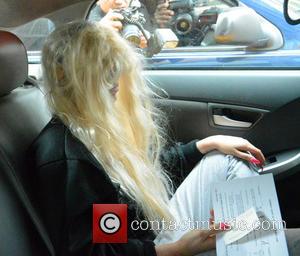 Picture: Amanda Bynes - Amanda Bynes wearing a bizarre wig leaves Manhattan Criminal Court and gets in a taxi, where she reads her court date notice....

Troubled actress Amanda Bynes is attempting a fresh start as she enlists in Fashion College.

The 27 year-old has decided to go back into education following her stint in rehab.

TMZ reports, Bynes has enrolled into FIDM -- the Fashion Institute of Design and Merchandising, for two classes on an Orange County campus.

The 'Hairspray' actress was released from a rehabilitation facility last week and is now in her parents care.

After a string of incident where Amanda displayed erratic behaviour, including her arrest for setting fire to an elderly woman's driveway, she was held in a psychiatric hospital to undergo treatment for bipolar disorder and schizophrenia.

However, the 'She's The Man' actress has now been released into her parents care and lawyer Tamar Arminak released a statement that read; (via People)

"Amanda and her entire family would like to thank everyone who's contacted them with good thoughts and wishes for Amanda's recovery. Amanda has completed her inpatient rehabilitation and she's feeling better every day."

After leaving the rehabilitation center in Malibu, "She's now looking at various colleges with the intention of majoring in fashion design," the statement continues. "She's mentioned before she's interested in creating a clothing line."

Prior to Bynes' previous arrest her behaviour became increasingly bizarre when she attacked fellow celebrities on twitter for no apparent reason. She also appeared in court for tampering with physical evidence after throwing a bong out of her apartment window to hide evidence.

The fire on the driveway was the final star and in mid-July she was hospitalized for a psychiatric evaluation.

Hopefully the former child actor will now be recovering well as she looks forward to attending Fashion College in the New Year.