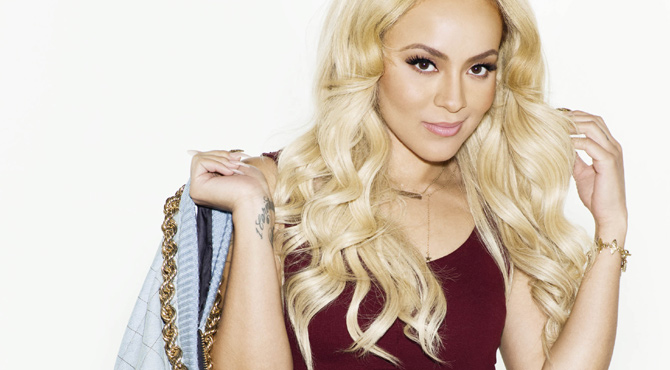 An Interview with Alyxx Dione

Having just signed to Jason Derulo's RCA Records off-shoot label Future History, Alyxx Dione makes her debut with the single 'Chingalina' ahead of the release of her first album which she has already began working on. This young singer-songwriter is causing some serious buzz on social media, so we caught up with her to see what all the fuss was about...

Alyxx talks Janet Jackson, the importance of family and fan presence on Instagram.

Contactmusic: Thanks for taking some time out to answer our questions! We thought it'd be fun to start with some 'quick fire' ones first. Tea or Coffee?
Alyxx Dione: Tea.

CM: Name one of your phobias.
AD: I am arachnophobic. I'm terrified of spiders.

CM: What's your favorite Book?
AD: 'What I Know For Sure' by Oprah.

CM: Where's your favorite place in the entire world?
AD: My bedroom. It has become my safe haven. It's peaceful; being in there gets my creative energy going.

CM: Tell us one quote you keep close to your heart.
AD: "Love is kind, love is patient".

CM: You recently signed to Jason Derulo's label, how did that come about?
AD: I'm a huge Jason Derulo fan. He actually saw one of my music videos a little while back and was interested in meeting me. He and his manager, Frank Harris, got in touch with me and we set up a meeting ASAP. Literally within 25 minutes of meeting, Jason asked if I was interested in signing with his label and said he had a song for me that he thought would be a hit. The song was 'Chingalinga', I was humbled and beyond blessed for the opportunity. I signed with his label, Future History, and 'Chingalina' is now my first single.

CM: Tell me a little about the single.
AD: Well when I first heard the track, all I wanted to do was dance. After listening to the song a couple times, I fell in love with the concept. The song is about working hard for something you really want and, as a woman, holding on to the key to your heart until someone deserves to have it. That's an important message I feel needs to be expressed today.

CM: What's the best piece of advice he's offered you so far?
AD: Definitely to always put God first, be myself, and always believe in myself 1000 percent.

CM: Do you ever feel a high level of pressure? If so, how do you deal with stress?
AD: I do feel pressure at times but I welcome it because pressure means something great is going to happen. When I do feel stressed, however, my family plays a huge role in keeping me sane. I speak to them daily. My family is my rock.

CM: Is the song writing aspect of being a popstar something you want to continue to be more involved with?
AD: Absolutely. Song writing is therapeutic for me, I love being able to tell stories, and connect with my fans.

CM: I believe you're working on an album at the moment. What stage at you at with that?
AD: Yes, I'm in the early stages of making the album. It's an intricate process; I am pouring my heart and soul into the album especially being that it is my first. It's going incredibly well! I'm beyond excited to be able share my journey with the world and really give my fans an all access view of who Alyxx Dione is, not only as a performer, but songwriter as well.

CM: If you had to cover a song to feature on the record, what track would you pick?
AD: 'That's the Way Love Goes' by Janet Jackson.

CM: You have a fab Instagram following, would you say that your Instagram success contributed to getting into the music industry?
AD: I love my fans. I think what Instagram did and what social media does in general is allow artists to connect with their fans in a special way.

CM: It seems ever more important to pop fans that - through the likes of Instagram and Twitter -  popstars share more and more of their lives on a personal level, do you think this is needed?
AD: I wouldn't say that it's needed, but I think it helps fans get a feel of who their favorite artists are by getting a glimpse of their life on social media.

CM: Is music something you've always wanted to do?
AD: When I was kid I actually wanted to be a fashion designer. I didn't discover my love for music until I was 11. I was watching a Janet Jackson video, dancing and performing for my family when it clicked. I knew from then on that I wanted to be an entertainer.

CM: When you were a little girl, who did you aspire to be like?
AD: I get a lot of my creative inspiration from both Aaliyah and Missy Elliot. Aaliyah was an amazing talent. She was beautiful, confidant, stylish, and a great singer. Missy Elliot was and still is so incredible. She's an accomplished songwriter, producer, singer, and rapper. She's multi-faceted. Missy and Aaliyah elevated the platform for women in this industry to achieve and paved the way for artists like myself.

CM: You've discussed how music is medicine to you - name one song will always cheer you up?
AD: 'Pocketful of Sunshine' by Natasha Bedingfield.

CM: Are you heading out on tour anytime soon? What's next in the world of Alyxx Dione?
AD: Hopefully so! Definitely more music, more videos, and an album coming soon!