Alyssa Milano has announced she is pregnant with her first child with husband David Bugliari. 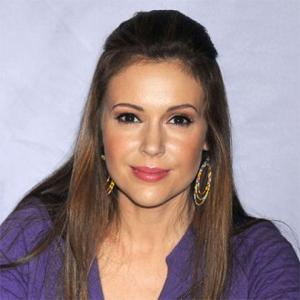 Alyssa Milano is pregnant with her first child.

The 'Charmed' actress - who is married to Hollywood agent David Bugliari - confirmed the news on her twitter page and admitted she "couldn't be happier".

The 38-year-old star wrote: "Yes, it's true. And we couldn't be happier. Thank you for your warm wishes and love!"

Alyssa - who has previously dated singer Justin Timberlake and late actor Corey Haim - welled up thanks to her followers' well wishes saying she had "big chunky tears" in her eyes.

She added: "I am overwhelmed by the outpouring of well wishes! I'm reading each one w/ big chunky tears in my eyes. GROUPHUG Get in. (sic)"

The former child star - who was briefly wed to rocker Cinjun Tate of Remy Zero, divorcing months after they tied the knot in 1999 - married David in 2009 and admitted soon afterwards she was keeping an open mind about having children.

She said: "I think we are just going to go with the flow. So we'll see what happens. But I am getting older. Gotta get on it!"

When she tied the knot with David at his family home in New Jersey, Alyssa made sure to refer to her Italian heritage at the reception dinner, which was served on rustic farmhouse tables under iron chandeliers.

She said: "We wanted a wedding that was reflective of who we are as a couple. My Italian family still eats Sunday dinner together every week.

"We wanted to capture the same feeling with people passing around beautiful bowls of food and talking and laughing."