Alyssa Milano and her husband, Hollywood agent David Bugliari, have welcomed their first child into the world today (31.08.11), a son they have named Milo Thomas Bugliari. 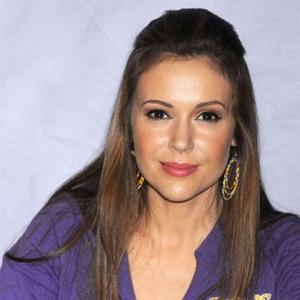 Alyssa Milano has given birth to a baby boy.

The 38-year-old actress and her husband, Hollywood agent David Bugliari, welcomed their first child into the world this morning (31.08.11).

The tot weighed 7lb and the overjoyed couple have named their new arrival Milo Thomas Bugliari.

The 'Charmed' star's representative said: "Alyssa and her husband David proudly announce the birth of their son, Milo Thomas Bugliari. Milo Thomas was born on August 31 at 9.27am weighing 7 pounds and was 19 inches long."

She wrote: "Thank you for all the well wishes for my son Milo. My heart has tripled in size. I love him more than all the leaves on all the trees."

Alyssa - who married David in August 2009 - knew she was having a son throughout the later stages of her pregnancy but was refusing to pick a name for her baby until she met him.

She previously said: "We have three names. You hear so many stories about people who picked a name out and then the baby didn't look like the name. So we're narrowing it down until we see the child. However, we will go with a slightly Italian name, so that it goes with Bugliari."