'Charmed' actress was not in a relationship with Jennifer Aniston's partner. 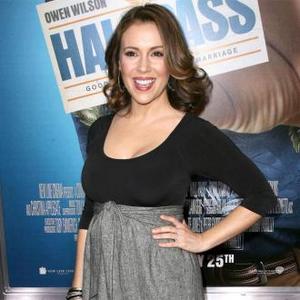 Alyssa Milano has denied dating Justin Theroux before he was in a relationship with Jennifer Aniston.

After Entertainment Weekly listed the 'Charmed' star and the 'Wanderlust' actor as one of their surprising celebrity hookups, Alyssa was quick to shoot the claim down.

The 39-year-old actress said via twitter: ''Completely false. We were co-workers & great friends but never dated.''

The pair met on the set of 1997 thriller Below Utopia where their roles as an on-screen couple were rumoured to have led to a real-life romance.

However Alyssa has clarified that he was in fact involved with her friend, Kathryne Dora Brown, while they played lovers on camera.

She clarified: ''He dated my best friend at the time. I love that guy.''

Meanwhile Justin, 40, and Jennifer, 43, share a home together in Los Angeles.

Jennifer Aniston is also looking for a home in London while she shoots low-budget comedy drama 'Miss You Already' in the UK capital and has instructed her representatives to find her a property to rent.