Posted in Press Releases on 14 February 2013 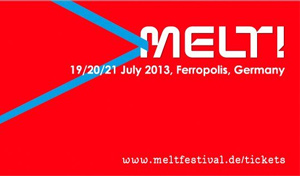 Melt! Festival, which takes place from 19 to 21 July, announces the first wave of acts for 2013 with 60+ artists to perform on the peninsula of Ferropolis close to Gräfenhainichen.

It's been almost seven years since The Knife have released their last album Silent Shout. Now the Swedish siblings are back with Shaking The Habitual and an exclusive performance at Melt! 2013. After having sold out their European tour within hours, the electro duo will play their only festival show in Ferropolis.

On their debut album, An Awesome Wave, Alt-J bring together dubstep, hip hop and folk influences, a bold mixture which won them the prestigious Mercury Prize. This summer, we'll be witness to yet another smashing live performance. With his laid back post-dubstep arrangements, James Blake is also keen on approaching genres open-minded and with a little twist. At Melt! Festival, he'll present us with his sophomore album. In addition, the New York-based rapper Azealia Banks will perform her only show in Germany in Ferropolis this year. Further acts to appear at Melt! for the first time are Solomun and Flying Lotus.

For the fourth time, Modeselektor will curate the Melt!Selektor Stage. As a very special highlight, Modeselektor will get behind the decks together with Apparat to give us a glimpse of the new Moderat album. Also taking over our stage at the Melt! beach are Mount Kimbie, Blawan and Pariah's new live project Karenn, Jimmy Edgar and Machinedrum live under the guise of Jets, Ben UFO, Otto Von Schirach, Fantastic Mr Fox, Bambounou, Sinkane, Mykki Blanco and Zebra Katz. Further acts will be announced soon.

Woodkid, Kettcar, Django Django, Owen Pallett (formerly known as Final Fantasy), Everything Everything and Daughter are amongst the first indie acts to get on stage at Melt! Festival.

Again, our line-up not only features Melt! residents but up and coming hotshots as well. Alongside promising newcomers such as Churches, Disclosure, King Krule or Laing. DJ Koze will be part of the bill with his new solo album, while SBTRKT will get behind the DJ booth this time. Henrik Schwarz & Band is also part of the line-up as well as Todd Terje & Lindstrøm. Henrik Schwarz and Âme will conquer the stage with a new live project under the moniker of Schwarzmann.

The Berlin-based electro label Get Physical will take over the Sleepless Floor with a label special and the following acts: M.A.N.D.Y., Wankelmut, Catz 'N Dogz, Andhim and Smash TV (live).
Of course, it wouldn't be a proper festival without Ellen Allien's Bpitch crew ringing in the final hours at our nonstop stage with a Bpitch Special. We're also glad to have the Crosstown Rebels with us, celebrating 10 years of label history with a 'Rebel Rave' at the Big Wheel Stage: Damian Lazarus, Art Department, Jamie Jones, and further special guests are scheduled to appear.

Further high-class acts for this year's Melt! Festival, which will feature more than 120 acts on 6 stages, will be announced shortly.