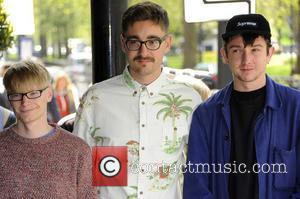 The Something Good hitmakers staged a secret show at the William's Green stage, and fans packed out the tent to watch one of the first performances of this year's (13) festival.

Keyboardist Gus Unger Hamilton told the crowd, "Hello Glastonbury! I tell you what, it's pretty f**king amazing saying that. It's only Thursday and you guys are loving it! Awesome."

The band is due to perform again on Friday (28Jun13) with a scheduled slot on The Other Stage.

Liam Gallagher's band Beady Eye is rumoured to be playing a surprise set at the festival on Friday morning (28Jun13).

Headliners at the 2013 event include Arctic Monkeys, The Rolling Stones and Mumford & Sons.