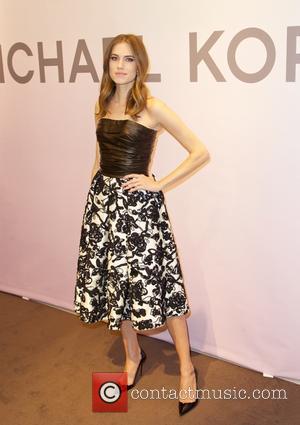 Actress Allison Williams has put her wedding plans on hold to support her embattled father Brian Williams as his job as a top U.S. news anchor hangs in the balance.

Brian Williams has been handed a six-month suspension from NBC News bosses after he was found to have falsely claimed he was onboard a U.S. forces helicopter that was shot down by opposition gunmen during the Iraq War in 2003.

Girls star Allison defended her dad during a public interview with comedian Seth Meyers in New York on Wednesday (18Feb15), insisting the reporter is not a liar.

She said, "This has been a really hard time. Obviously, (it is) toughest on my dad, who is sort of bearing the full burden of the responsibility for it, but my mum has been so strong.

"My dad has always been there for us 100 per cent of the time... so to be here for him is the least we can do... One thing this experience has not done is shake my trust and belief in him as a man. He's a really good man, an honest man, a truthful man. I can't wait until he's back on Tv, and I know many of you guys feel that way."

During the session, the actress also admitted the controversy, on top of her busy schedule, has prompted her and her fiancee Ricky Van Veen to hold off on plans for their big day until the scandal blows over.

She told the audience, "It's been a very full year. You sort of think, 'What could possibly come along that would make me not think about this (wedding planning)?' And then I get (U.S. Tv special) Peter Pan and I think, 'Ok, I will think only about Neverland and then we'll go back to planning our wedding.'

"Then current events started happening, so that derailed it a little bit, but it has been this really beautiful through line in our lives. It's just something we haven't focused on, but, spoiler alert, we are excited!"

Van Veen, the co-founder of comedy website CollegeHumor.com, proposed to the actress in early 2014.