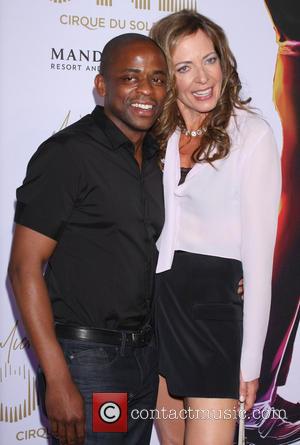 Actress Allison Janney's relaxing summer vacation came crashing to an end recently after her three dogs were sprayed by a skunk minutes after she returned home.

The former The West Wing star settled in for a hot bath at her Los Angeles pad to relax after a whirlwind trip with her pals to the Aspen Food and Wine Classic in Colorado earlier this month (Jun13), but her evening of bliss was rudely interrupted when her pooches got involved in a scrap with a skunk.

She explains, "I come back at like 10pm to my house in L.A., and I have three dogs and they got dropped off by the boarder. I got into a hot bath to relax after this crazy weekend and I hear this commotion on the hillside, a crazy dog fight thing. I'm like, 'What the heck is going on?' I jump out of the bath and run into the living room to meet the dogs, all three running through the doggie door, rolling on the carpets and they'd just gotten into a fight with a skunk. So all three dogs skunked at 10.30pm in my house. And I was naked. I just fell on the floor in a puddle of tears."

The 53 year old had to call the pet groomer to help clean up the stinky mess and the single star adds: "I was up to 1.30 (am) scrubbing them (the dogs)."