All We Are - Cardhouse Video

Artist: All We Are
Song title: Cardhouse
Year: 2012
Genre(s): Alternative

Multi-national folk-pop three piece All We Are have recently digitally released the lead track 'Cardhouse' from their new EP 'We Hunt' as a download absolutely free of charge.

This melancholy track is beautiful mix of male and female vocals with haunting harmonies, pulsing bass lines that hit you right where the heart is and a delicate guitar instrumental. According to the band, 'The song 'Cardhouse' is essentially about loss. It's tenuous at best and can easily come crashing down at an unexpected moment.' It's no wonder that the band, hailing from Brazil, Ireland and Norway, are already a massive hit in their current hometown of Liverpool. They are certainly set to entice audiences everywhere with their uniquely raw sound and natural resounding echo.

The trio; Rich, Guro and Luis; have written and recorded their songs in the quietest places they could come across that wasn't music studio including a cabin in a remote part of a forest in Norway and an old church. The decision to record in the woodland was a very careful choice the band made as they wanted to be surrounded by the inspiring 'tranquil' setting. 'We actually feel the Nordic forest hillside rubbed off on the way some of the guitar lines actually sound, particularly in Cardhouse,' says drummer Rich.

All We Are - Cardhouse 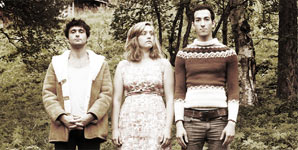 All We Are - Cardhouse Video