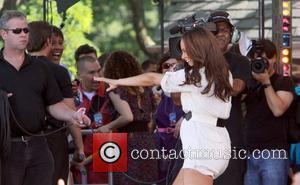 Parents-to-be Alicia Keys and rap producer Swizz Beatz have married in a ceremony in Corsica, France.
The No One hitmaker, who is pregnant with the couple's first child, walked down the aisle on Saturday (31Jul10) in front of family, friends and A-list stars including U2 rocker Bono and Queen Latifah.
Keys looked radiant in a flowing white gown and headband, while the groom wore a white tuxedo jacket, pink shirt and bow tie for their big day.
The nuptials on the Mediterranean island proved to be a relaxed affair - Keys showed off her baby bump in a bikini while enjoying a dip in the pool before exchanging vows.
The singer announced her pregnancy and engagement to Beatz in May (10) and their baby is due later this year (10).