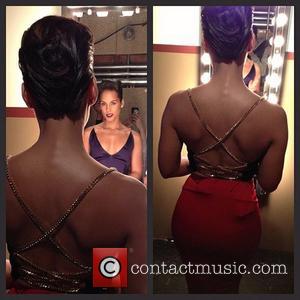 Picture: Alicia Keys has posted this image on Instagram with the caption 'Hanging with my guy @JimmyFallon tonight! Tune in at 12:35am EST! Maybe we'll do...

R&B star Alicia Keys is still waiting for the opportunity to meet folk rocker BOB DYLAN, six years after she inspired a song on his album Modern Times.

The Empire State of Mind hitmaker was stunned and flattered to hear Dylan singing about her childhood growing up in New York's Hell's Kitchen neighbourhood on his track Thunder on the Mountain on the 2006 project - because they had never even spoken to one another.

She tells Details magazine, "I still don't know him. We never got a chance to catch up. I might be a little scared. It's the craziest, biggest compliment ever, and I was in complete disbelief. Whatever inspired him, it's definitely pretty damn cool."