Alicia Keys brought the house down as she performed at Manchester Cathedral for MTV Crashes Manchester last night (24.09.12), where she played her classic hits as well as showcasing songs from her new album 'Girl On Fire'. 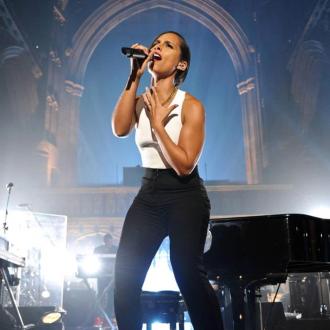 Alicia Keys brought the house down as she performed at MTV Crashes Manchester last night (24.09.12).

The Grammy-winning singer put on an amazing show at Manchester Cathedral, North West England, mixing her classic hits with new songs from her forthcoming album, 'Girl On Fire'.

The lucky fans who got to see the show were treated to songs such as 'Try Sleeping with a Broken Heart', 'Empire State of Mind', 'No One' and 'Fallin', while new songs such as 'Girl On Fire' and 'Not Even The King' also received hearty cheers from the audience.

After the show, Alicia said: ''It was great, I loved it. I've been feeling so interestingly different performing these songs. Today I felt so calm, and paced, and right in the zone with the crowd. I loved this show, and what a beautiful venue.''

Alicia was supported by Lianne La Havas, who got the crowd going before Alicia's performance.

She said: ''The atmosphere was electric - and to share a stage with Alicia Keys, Wow!''

MTV Crashes Manchester was a free, ticketed live music event, created in collaboration with Manchester City Council and filmed for MTV World Stage - a global series that brings multi-genre talent with global relevance to audiences around the world through MTV's extensive global network.