Young, New York legend Alicia Keys is certainly a household name around the world. With a career with distinction that boasts far beyond her years, Alicia's first contribution in 2001 was indeed a classic. It's fitting in this world of change and harmony to reintroduce such a positive message of peace, hope and love, from a talented girl whose virtuoso piano playing and soulful elegance combined to create 'Songs in A Minor'. For many it was a flash of brilliance from such a musically mature girl, it almost felt like this was the future. 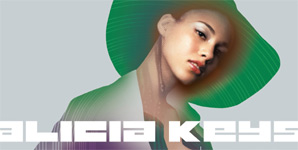 The Collectors Addition is pretty much a replay of the original, with CD2 and DVD clips. It has been a long time since I heard 'Songs In A Minor' and to hear the whole album again in its entirety reminded me of how expressive, honest, heartfelt and genuine this American girl is. The talent speaks for itself in beautifully crafted songs like 'Goodbye', 'Butterflyz' and of course the classic hit 'Fallin'. The shape and scope of this debut album certainly shows pristine quality with an ethic to professionalism and a humility in Key's voice, that stands her apart from other singers in any genre. The keyboard skills are heavyweight and the album as a whole, a genuinely great piece of work.

We're lucky to get CD2 that shows the songs of Keys' adapted to other genre's, notably hip hop, but also the pop influences of Keys are illuminated here too. It's very cool to get the 'Live From Seattle' touch and classic remixes.

It's certainly a pleasure to be reminded of such talent. Her music is known as popular and the theme of music is specific to soul, pop, and progressive production. It's all very slick and might not be everyone's cup of tea, but if you want to try a slice of Alicia, I definitely say 'Songs In A Minor' is the lick! Classic! Big up!