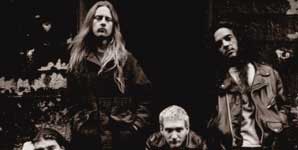 Ten years after their last concert, Alice In Chains has decided to reclaim their heritage and embark on a surprise U.S. club tour as a warm up for their 5-month tour of the UK and Europe. They returned for several U.S. festival dates and will pick up again in the fall (dates to be announced soon). The band looks forward to its 20th anniversary next year with the release of The Essential Alice In Chains, which will arrive in stores Sept 5th on Columbia/Legacy, a division of Sony BMG Music EntertainÂ­ment.

The first comprehensive two-CD collection ever issued on Alice In Chains is a chronological ascent from 1990 (four cuts from their debut album, Facelift, including "We Die Young," title track of the three-song Columbia debut EP released earlier that year) up through 1999, ("Get Born Again" and "Died," the two newly recorded tracks on their three-CD box set retrospective, Music Bank). The Essential Alice In Chains gathers its 28 selections from all four original albums they recorded, Facelift (1990), Dirt (1992), the self-titled Alice In Chains (1995), and the live 'acoustic' MTV Unplugged (1996), as well as from their two EPs, SAP (1992) and Jar Of Flies (1994). Also included are remixes of their two songs from the Last Action Hero original motion picture soundtrack album (1993, the only band with two cuts on the album).

Alice In Chains - The Making...

Alice In Chains Would?

Alice In Chains Man In The...

Alice In Chains I Stay Away

Alice In Chains Heaven Beside You