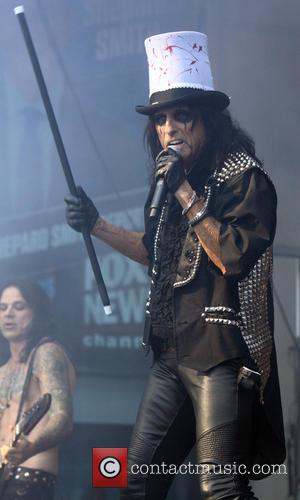 The celebrity cuisine connoisseur, dubbed The Rock 'n' Roll Chef by Rolling Stone magazine, lost his battle with rare neurodegenerative disease multiple system atrophy last month (Sep15) and now Cooper has offered up a tribute to his pal, revealing he has scored a very special keepsake.

The School's Out rocker keeps the black cane with a solid silver skull in "a very special place" in his house, adding, "It wasn't just a cane, but it was a cane that he (Simon) was actually using before he got into the wheelchair, so now, every time I look at that, I can't help thinking about Kerry."

Recalling his late friend, Cooper adds, "He looked like he probably played lead guitar in a band somewhere, not like a chef... He was just comfortable to be with and I think that's something that rockers look for.

"He just had this natural vibe to him. He seemed more like a guy that would have somehow been involved in music a lot heavier than he was, but I think that's what appealed to everybody."

Joe Perry, Cooper's bandmate in supergroup Hollywood Vampires, was also a fan - he tells Rolling Stone, "I actually never got to one of his restaurants, but so much of it has to do with who you are outside of your actual talent. You can write a hit song, or your paintings can get recognised, and all (of a) sudden you're on that next level - but a lot of people change with that. And he did not seem to have that at all, he just seemed to be the same guy. And that's what made him special.

"There's a reason they called him the 'Rock & Roll Chef'. Somebody like that, you feel like you've known him for a while, or you've met him before, and that's the common thing with that rock & roll spirit - and he definitely had that through and through. I felt like I'd known him before."