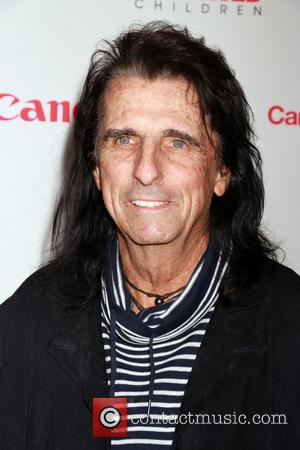 Picture: Alice Cooper - Shots of a variety of stars as they attended the 15th Annual Fundraiser benefiting the National Center For Missing & Exploited Children...

Alice Cooper will hit the stage with guitarist pals Joe Perry and Johnny Depp at this year's (15) Rock In Rio festival in Rio De Janeiro, Brazil.

The veteran will reunite his Hollywood Vampires supergroup for a set on the beach in September (15), where he'll join Faith No More, Queens of the Stone Age and System of a Down among the performers.

Cooper took the Hollywood Vampires name from the group of heavy-drinking rock stars that he formed in the 1970s alongside John Lennon, Ringo Starr and Keith Moon.

Ironically, Depp, who has performed onstage with Cooper on several occasions, recently told reporters he hates actors who form bands, stating, "That whole idea for me is a sickening thing; it's always just made me sick. I've been very lucky to play on friends' records and it's still going. Music is still part of my life. But you won't be hearing The Johnny Depp Band. That won't ever exist."