Alice Cooper surprised the crowd by appearing at the climax of rock musical 'Rock of Ages' in London last night (14.08.12). 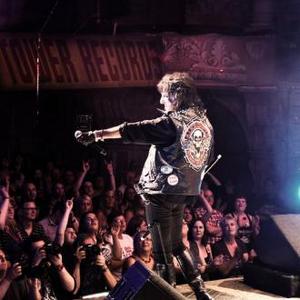 The shock rocker stormed the stage at the climax of the hard rock musical, to perform his hit 'School's Out' in Celebration of 40 years since it reached number one in the UK singles chart.

As he appeared, Alice demanded his voice to appear in the monitors so he could sing, pushing the cast out of the way to get to The Front of the stage.

He then asked the audience, ''You want more?'' before launching into the classic track.

Alice, 62, was joined by a rowdy crowd for his performance and met with fans and cast members including Shayne Warde and Justin Lee Collins.

Earlier yesterday, Alice had teased fans about his performance.

He tweeted: ''Hearing that @rockofagesuk in London is GOOD. But worthy of me crashing their little show? I'LL BE THE JUDGE OF THAT! (sic)''

He also tweeted a warning to some of the show's starts, writing: ''OK @shayneTward, @sandy_moffat & @simonlipkin - YOU'RE NEXT! #IKnowWhereYouLive. (sic)''

'Rock of Ages' is currently being staged at the Shaftesbury Theatre in London.