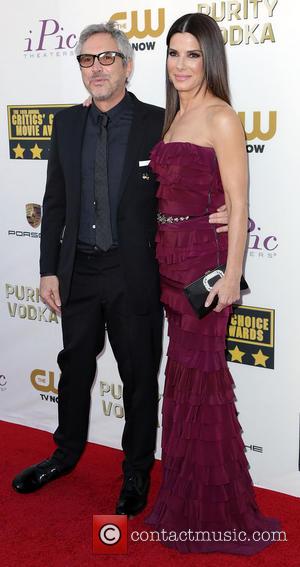 Mexican director Alfonso Cuaron used his acceptance speech at a benefit gala in New York City to demand justice for slain students in his native country.

The Gravity filmmaker was the guest of honour at the Museum of Modern Art's annual film benefit gala on Monday (10Nov14), with his family, friends and former co-workers on hand to celebrate his acclaimed body of work.

But when he took to the stage to accept his prize, he used a portion of his time to speak out about the students of the Ayotzinapa Teacher Training College who went missing after taking part in a protest in the city of Iguala on 26 September (14). The students' convoy of buses came under fire from local police, and it was later confirmed the entire group of young people had been killed. Thousands of Mexicans have subsequently taken part in protests across the country, demanding action from the government.

Cuaron, along with son Jonas and fellow Mexican director Guillermo Del Toro, added their voices to those seeking justice for the students, as they read an official statement, which was co-signed by an absent Alejandro Gonzalez Inarritu.

Cuaron read: "This past September, 43 students were kidnapped by the local police in the state of Guerrero, Mexico. After a period of apathy, the authorities only then were forced to search for them, due to the protestations of citizens across the entire country and the world, and they found the first of many, many mass graves.

"None of these graves contained the remains of the missing students. The bodies within them were those of other anonymous victims. Last week, the general attorney announced that the 43 students were handed over by the police to members of a drug cartel to be executed and burned in a public dumpster. But even of the identity of those charred remains awaits proper Dna."

Del Toro added: "The federal government argues that these events are all just local violence - not so. As Human Rights Watch observes, these killings and forced disappearances reflect a much broader pattern of abuse and are largely a consequence of the longstanding failure of the Mexican authorities.

"We believe that these crimes are systemic and indicate a much greater evil: the blurred lines between organized crime and the high-ranking officials in the Mexican government. We must demand the answers about this and we must do it now."