Alexandra Burke says she was ''nervous'' to pose nude in an anti-fur campaign for animal rights charity PETA. 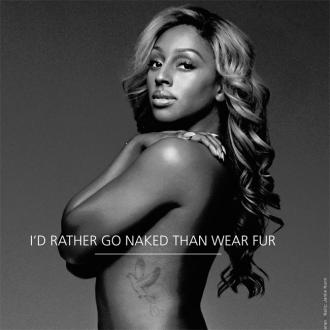 The 'Bad Boys' singer admits she was ''nervous'' before stripping off for the animal rights group's 'I'd Rather Go Naked Than Wear Fur' campaign, which has seen a number of celebrities bare all for People for the Ethical Treatment of Animals.

Alexandra - who won 'The X Factor' in 2008 - got naked in front of famed photographer Kevin Davis, and admitted it took a while to feel comfortable fully exposed in front of the camera.

She revealed: ''I was nervous about posing nude as I've never done it before.

''It was uncomfortable initially, but the photographer made me feel relaxed and at ease. Ultimately I love my body, so it was great to do something for such a worthwhile cause.''

The 25-year-old beauty shows her collection of tattoos on her ribcage and waist, including a dove and Roman numerals in the sultry black and white image with a caption that reads: ''Be Comfortable in Your Own Skin, and Let Animals Keep Theirs''.

PETA's proactive campaign, aims to eradicate the use of fur in the fashion industry and fight against the poor treatment of animals who are often cramped into small cages and skinned alive to produce fur coats, collars and cuffs.

Alexandra admits it was an easy decision to agree to pose for the campaign because she finds the abuse animals suffer on fur farms completely abhorrent.

She said: ''When I found out what happens to animals on fur farms my heart just sank. I have animals and the thought of someone hurting them so they can be turned into a coat makes me sick. ''Anyone thinking about buying or wearing fur should watch PETA's videos of animals suffering on fur farms - after seeing them, I can't imagine anyone would want to be caught dead in fur.''

Other stars to pose for the 'I'd Rather Go Naked Than Wear Fur' campaign include Pamela Anderson, Kelly Brook, Alicia Silverstone and Eva Mendes.