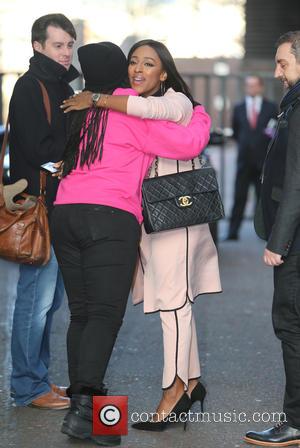 The Bad Boys hitmaker took on the role made famous by Houston in the musical adaptation of the hit 1992 film, and she was devastated when she heard the news that Brown had passed away in July (15), aged just 22.

Brown lost her fight for life six months after she was found unresponsive in a bathtub at her home in Georgia, and Burke admits she was stunned by the similarities between the tragedy and Houston's death in 2012.

She tells Britain's Seven Days magazine, "My mum (Soul II Soul singer Melissa Bell) had the privilege of working with Whitney Houston... many years ago. I remember mum coming home and saying she had told Whitney about me... I never met her and I never knew her daughter, but on Bobbi Kristina's Twitter feed you could see she was trying to embark on her own music career and was trying to follow her dream... For her life to be taken so tragically and so short is just heartbreaking... To hear she had been found in similar circumstances to her mum was devastating and I took the news quite badly. Then, when we heard she had died, again I was very emotional. I dedicated my performance of The Bodyguard that night to both Bobbi Kristina and her mum, and I know the whole company and cast found it a very emotional performance."

The Bodyguard closed in London's West End last summer (14) but Burke returned to the role for an ongoing U.K. tour.

Houston drowned in her bathtub at the Beverly Hilton hotel in Los Angeles in February, 2012.