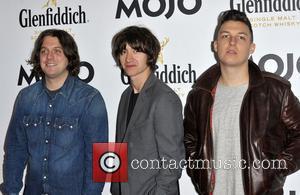 Arctic Monkeys frontman Alex Turner appears to have moved on from ex-girlfriend Alexa Chung - he was spotted passionately embracing a mystery woman at Los Angeles' Lax Airport.
The British rocker and former model Chung ended their four-year relationship in July last year (11), insisting the split was "completely amicable".
Turner vowed to keep a low profile following the break-up, but he was spotted in the arms of a pretty redhead as he arrived in L.A. on Sunday (12Feb12), and the pair had no problem showing off their affection for each other.
The woman jumped into Turner's arms and wrapped her legs around him as they met, and they subsequently cuddled and kissed in the arrivals hall in front of stunned onlookers.