Blogger Nikki Manashe hit out at her man's ex-wife and defended Alex for his penchant for cross-dressing as his female alter ego Roxanne in a heated online debate after the retired cage-fighter discussed his previous marriage in a new interview.

The teaser clip for the retired cage fighter's chat with podcast host James English saw him claiming Katie allegedly showed an X-rated video of him to an audience of around 40 people, and he later branded her a ''sociopath''.

Viewers pushed back at him in the comment section and accused Alex of not moving on, while also referencing his penchant for cross-dressing.

Responding to the remarks, his 34-year-old partner wrote: ''So f****** what if he wore a dress or a pair of F****** jeans you absolute troll who can't even show her face and uses an icon to bully. That's a crime in itself.

''It was a book launch for that old leather face and the other time was for Halloween. Her brother also cross dressed.''

Katie was asked for a response to the comments, and she wished her former husband well while distancing herself from the issue.

Her rep told Mirror Online: ''Katie won't be goaded into any further tit for tat, conflict or comment, only that she wishes them peace and a happiness.''

Alex, 44, split from Katie, 42, in January 2011, after almost a year of marriage, and since their break-up he has had to endure her ridiculing him in public about their sex life, of which she has spared very few details.

In March, Alex was awarded £25,000 in damages by a high court judge following legal action taken by part-time actor for sharing intimate details of their sex life and showing an explicit video of him to people off-camera during filming on 'Celebrity Big Brother's Bit on the Side' in January 2018. 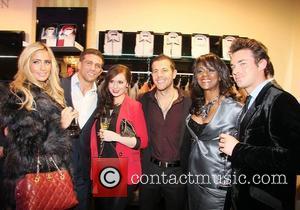