Alex Pettyfer enjoyed working with his filmmaking ''icons'' on new movie 'I Am Number Four' and hopes his work matched their usual standards. 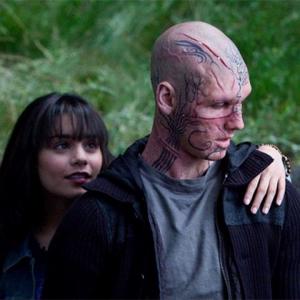 Alex Pettyfer worked with his "icons" on 'I Am Number Four'.

The British actor - who stars alongside Timothy Olyphant, Teresa Palmer, Dianna Agron, Kevin Durand, and Callan McAuliffe in the thriller about a group of aliens on the run from those who destroyed their home planet - admits he was initially overawed at being in a movie directed by D.J. Caruso and produced by Steven Spielberg and Michael Bay but is hopeful his work matched their usual standards.

He said: "You know it's funny, you're a kid and you idolise these people like DJ, Steven Spielberg, Michael Bay, and you think of it as a lifelong dream and when it finally happens it kind of takes your breath away.

"But at the same time you're making a movie that you're so proud of, at the end of the day you're collaborating together to make a movie that everyone goes and sees and enjoys. And that's the final picket of it all, you know, you work with your icons because these guys know what they're doing and they make the best movies that you've enjoyed in the past, now you just wanna come on the team and make a movie that hopefully everyone else in the world will enjoy as much as you have experienced it."

Alex, 20, also admitted he doesn't have a preference between large or small budget movies, and chooses his roles dependent on whether he enjoys the storyline.

"I think about certain aspects like who's making the movie and who's gonna tell a story that I wanna be involved in. What I really love is finding a script and fantasizing and going to a different world and kind of portraying a character that is interesting. "