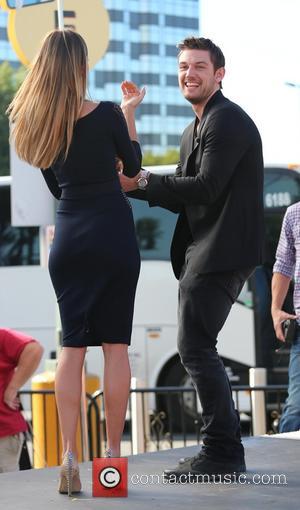 The actor wasn't afraid to take off his clothes for his role in the hit 2012 stripper film, and at Beacher's Madhouse club at the MGM Grand Hotel & Casino, he found himself shedding his shirt yet again.

Pettyfer joined dwarf dancers on stage, one of whom was wearing a furry bear leotard similar to the one Miley Cyrus made famous at the 2013 MTV Video Music Awards, and the Brit proceeded to smear whipped cream all over his chest and face.

Pettyfer was also joined by Beacher's Madhouse host Jeff Beacher, who joined in on the fun by wearing just his underwear and a bow tie, while the birthday boy playfully gave him a personal dance.

The Endless Love star arranged for his friends from the U.K. to fly to Sin City to attend the party, where he was given a large cake shaped like a female's bust in a red corset, while partygoers serenaded him with the traditional Happy Birthday tune.