Professor Deborah Lipstadt spent her life documenting and writing about the atrocities that happened in concentration camps during the second World War. She wrote numerous books on the subject and in 1993 she eventually published a book on holocaust deniers, a conspiracy theory that was growing in strength mainly down to a few pseudo-historians and Nazi supporters who deny the holocaust ever happened - or at best claim the deaths and gassings have been vastly over exaggerated.

Rightfully documenting the danger of denial, Lipstadt's book brought to light just how such stories take shape to become plausible to readers and creators of such literature. One of the people she named in her book was the British historian David Irving who had written multiple books on Hitler and various parts of the war who supported the notion - amongst many other things - that Hitler didn't kill Jewish people for actively being Jewish and there were no gas chambers at Auschwitz.

Irving sues the professor and her publishers for Liable in the British court system and a long trial is set in motion. Lipstadt and her  team of lawyers must find a way to prove in a courtroom setting that the holocaust did happen and Irving's claims (stated in her book) are false and that he is therefore a holocaust denier.

Micky is an avid photographer enjoying her nightly social revelry in London until she bumps into an old friend from her childhood. Do is almost the opposite of Micky; she is quiet and reserved, but the pair immediately click as if no time had passed since they last saw each other. A passion that has long laid dormant is re-ignited between them despite the disapproval of those around them but little do they know that their star-crossed relationship is set to end in tragedy when they escape to the French villa where they had spent their summers together as kids. A fire breaks out causing the death of Do and some severe burns and amnesia for Micky. While she struggles to recall memories from her life, she is forced to re-learn her relationships with friends, family and former lovers while trying to make sense of who she is at the same time, with only the word of the people around her to guide her. 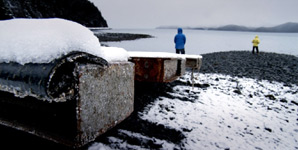 By Chris Cabin
Excellent
In a year already riddled with modern benchmarks in U.S. history, Stephen Frears now enters the deal with a reenactment of a worldwide tragedy: the death of Princess Diana and the subsequent rupture in public faith in the Royal Family. It's a tricky proposition: where most portraits of the Queen and her brood are either overly-stiff (for comedy's sake) or drab-as-death (for drama), Frears tries to show the family as no-bull normal people with dabs of sarcasm, sass and humor that could rub viewers the wrong way.

It begins with the landslide election of Prime Minister Tony Blair (a shockingly good Michael Sheen) and moves to the car accident that led to Di's death. Frears then meditates on the decisions and the struggle between modernism and tradition that Queen Elizabeth (Helen Mirren) and her family must consider in the wake of not just a familial, but worldwide, day of mourning. For those who don't remember, after the death, there was major pressure for the family to mourn in public, to show their grief and prove that even though Di wasn't part of the family anymore, they were still in a state of solemnity.

Micky is an avid photographer enjoying her nightly social revelry in London until she bumps...