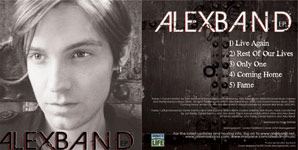 In 2002, The Calling had a worldwide hit in the shape of 'Wherever You Will Go', a soft-rock number which was permanently on the radio and music television. Whilst not quite being a one-hit wonder, subsequent releases failed to bother the higher reaches of the charts and the band went into hiatus after album two. Frontman Alex Band now returns with his first solo release, which he co-wrote and co-produced.

It may have been a few years since his last musical output, but there little has changed on the evidence of the five tracks on this EP. 'Live Again' is an empowering power ballad which allows Band to exercise his vocal range, while 'Rest Of Our Lives' sees him back to his best on an acoustic number. Mid-paced and dynamic, swooning strings aid an ambience fit for lighter-waving and swaying arms. 'Coming Home' is more of the same while 'Only One' and 'Fame' add a touch of R'n'B, but are still evidently the work of the same artist. Fans of Band's previous work should be fairly pleased with this release, which could also appeal to the likes of Goo Goo Dolls and Matchbox Twenty fans.