Robert Downey, Jr.'S Representative Has Played Down Allegations Suggesting The Actor Made "Racist" Comments About Mexican Filmmaker Alejandro Gonzalez Inarritu During A Recent Interview, Insisting The Remarks Were Taken Out Of Context. 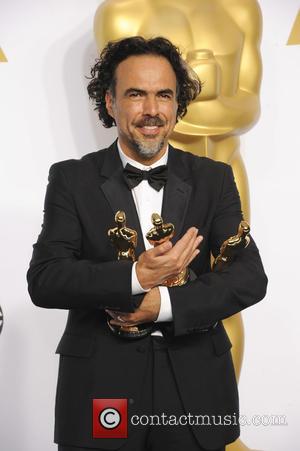 Picture: Alejandro Gonzalez Inarritu - Shots of a variety of stars in the press room at Hollywood's biggest night, the 87th Annual Academy Awards which were...

The Iron Man star sat down for a video interview with Britain's The Guardian newspaper last week (ends24Apr15) to promote the new Avengers: Age of Ultron movie, and during the chat, he was quizzed about Inarritu's past dismissal of superhero movies - the Oscar-winning Birdman director likened them to "cultural genocide".

Downey, Jr. responded, "Look, I respect the heck out of him. I think for a man whose native tongue is Spanish, to be able to put together a phrase like 'cultural genocide' just speaks to how bright he is."

His apparent jab at Inarritu's intelligence sparked a backlash online, with many fans of the director taking to social media to blast Downey, Jr. for his ill-advised comment, but now the actor's publicist Alan Nierob has spoken out to address the furore, insisting his client meant no disrespect.

Nierob says, "Taken in the proper context of the interview, it is intended to be, and is, complimentary."

The director has yet to address the controversy, which emerges two months after Sean Penn came under fire for poking fun at Inarritu's immigration status as he presented his old pal with the Best Picture Oscar at the Academy Awards in February (15), quipping, "Who gave this son of a b**ch his green card?"

Inarritu, who worked with Penn on the movie 21 Grams, laughed off the comment as a joke between old friends in the aftermath of Hollywood's big night, and the actor later claimed those who deemed his language offensive to immigrants missed the point he was trying to make.

Brushing off the scandal, Penn said, "I'm always surprised by flagrant stupidity... I have absolutely no apologies. In fact, I have a big f**k you for anybody who is so stupid not to have gotten the irony when you've got a country that is so xenophobic. If they had their way, you wouldn't have great filmmakers like Alejandro working in this country. Thank God we do."